We are currently sat almost 2,400 m above sea level with the clouds beneath us, staring at some of the world’s leading observatories.  My name is Martin and I am here with my colleague Alastair.  We are both graduate engineers from the UKATC in Edinburgh, and are currently here as part of a placement scheme within the STFC graduate training programme.

La Palma is the western most of the Canary Islands, and one of the best sites for Astronomy in the world.  This is partly due to the local weather system and latitude, which means that the clouds usually form at around 2,000m and thus below the peak of the mountain.  The high altitude also means that the distortion, or twinkling, of the light coming from the stars is reduced as there is less atmosphere for the light to pass through.  The island has been used as a site for Astronomy since 1979, and as such there have also been measures to reduce light pollution on the island.

The mountain top site is shared by several institutions, collectively known as the Roque de los Muchachos (The Rock of the Boys) Observatory.  Some of the telescopes of note here include the Swedish Solar telescope (below right), a 1m diameter telescope with an advanced adaptive optics system (allowing it to correct for atmospheric distortion) for observing the sun.  The highest telescope on the mountain is the Nordic Optical Telescope (below left), a 2.56 m diameter telescope first opened in 1988.  There are many instruments that constantly swap on and off this telescope, researching lots of different areas of Astronomy; from asteroids to galaxies.  The dome of this telescope is unlike any of the others in that the entire building rotates with the telescope!  We have been told by some of the astronomers here that this can be very disorientating when you try to access the building in darkness and aren’t sure where the door is anymore.


Two of the most eye catching telescopes here are known as MAGIC I and II.  These strange looking telescopes have huge metal mirror and no dome, and are designed to detect Cherenkov radiation caused by high energy particles entering the atmosphere.  They are operated by over 20 institutes from across Europe. 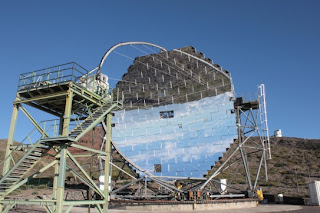 Roque de los Muchachos is also home to the world’s largest single aperture telescope, the Gran Telescopio Canarias.  The main mirror of this telescope is made up of 36 hexagonal segments, each around 2 meters across, making up a single mirror 10.4 meters in diameter.  When visiting we saw the other 6 segments they have in various stages of having their reflective aluminium coatings removed and replaced.  Due to the sand in the air here the mirrors get dirty over time, and even with regular cleaning the coating still needs replaced every so often.  By having a continuous stream of this happening, there are never any segments missing from the telescope.  Also of mention is the oil bearing on which the telescope mount sits.  This is so low in friction that it is possible, when the drive system is turned off, for a single person to push the telescope and its mount (around 400 tonnes) around by hand! 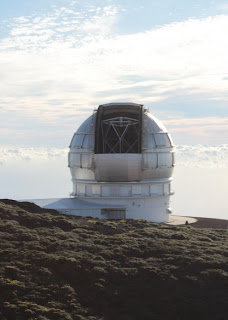 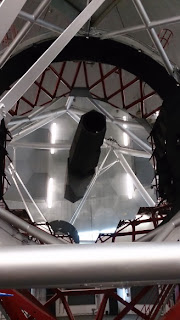 There are several other telescopes on the mountain not yet mentioned, and several of them are from UK institutes.  These will be covered in further blog posts over the next couple of weeks.

I have seriously neglected the blog for far too long, and it isn't because there hasn't been any news to report, certainly not. There has been plenty, but work has been busy, and I haven't been disciplined enough to set aside time to keep you all updated. But, I'm getting back into it now, and it seems fitting that I should do that almost exactly 1 year to the day since I set off for Chile on my wonderful WCMT Fellowship adventure (by the way, applications are open for next year's round of Fellowship funding).

Since I last wrote, various different big telescopes have gone through some excellent stages. I shall attempt to summarise in chronological order, without overloading you too much...

The Very Large Telescope and KMOS

Back in November, KMOS achieved first light on the Very Large Telescope. You may remember, this is the instrument which my colleagues at the UK Astronomy Technology Centre were heavily involved in and was shipped out to Chile just as I was coming home. After its arrival at the Paranal Observatory in August, it was checked out (for any damage during shipping etc.) and then fitted to the Nasmyth platform in September and October.

KMOS is only the second of the 'second generation' instruments to be fitted to the VLT.

For a reminder of what KMOS is, have a look at this STFC 'Backstage Science' video clip

At the start of this year, in January, the Royal Observatory Edinburgh hosted a meeting called 'VISTA: A Celebration'. This meeting brought together many of the scientists and engineers who have been involved in this project over the years. There were talks about the planning and construction, as well as talks about the fantastic science VISTA has done so far and talks about the future. 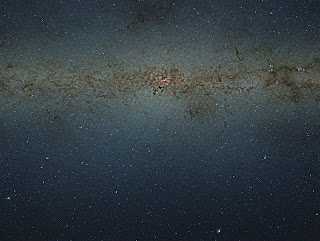 Using this data from VISTA, astronomers have been able to create a catalogue of over 84 million stars in the central parts of the Milky Way. Wow!

In March this year, ALMA had its official inauguration ceremony - this marked the formal transition from a construction project to a fully fledged observatory, although not all the dishes are actually in place just yet at the Operations Site.

At work, we gathered in the canteen to watch the live stream of the celebration from Chile and even had an ALMA cake to enjoy!!

Since first light in 2011, with a partial array of just 16 dishes, ALMA has already given some very interesting science results about galaxies, planet formation and stellar evolution.

When I visited ALMA, there were just 34 dishes in place at the Operations Site. As of 29th May there were 59 antennas in place. I was very excited back in February, as the final North American dish was put in place at the 5000m site. When I visited the Operations Support Facility back in July last year, I posted a photo showing the final North American dish still in the construction hanger. Just goes to show that the construction of the dish itself is just one part of the whole process of building the observatory.

The latest ALMA press release sheds light on how dust particles in the disc around a young star can clump together to start to form things like comets and planets. You can read the full press release on the ESO website.

Also in March this year, we had confirmation that the UK will participate in the E-ELT project - great news for my colleagues at the UK ATC. Since then, Portugal and Denmark have both confirmed their participation in the project too, and Danish company Ramboll have secured the contract to provide consultancy services to ESO during the construction of the huge dome required for the E-ELT. Construction of the E-ELT will hopefully start later this year.

The last blog entry I wrote was about the second of the instruments for JWST having been delivered to Goddard, keeping the UK ATC led MIRI company. In May, the MIRI was installed into the structure which will hold all the flight instruments.


So, I think that about does it for a brief round of the main big telescopes news since I last wrote. The next few entries are actually going to be 'guest' blog entries from 2 friends who are out in La Palma.

taniaj78
I am the Education Officer at the Royal Observatory Edinburgh. Employed by the Science and Technology Facilities Council, I'm responsible for the public and schools programme of events, highlighting STFC research and technology. I have been a science communicator for 10 years now, starting my career with the School of Chemistry, University of Edinburgh. Outside of work, I enjoy travelling, the arts, dancing and learning new things.